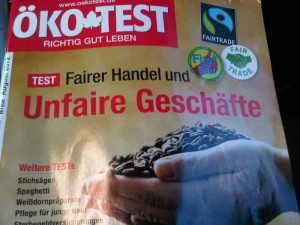 The German newspaper “Ökotest” published this month a test of “fair-trade” products. Out of the 34 tested coffees only 18 were considered to be really fair.

I am also asked many times why Solino does not have a fair-trade certificate. The reason: to get such a certificate we need about 8000 Euro that is paid to European certification companies (nobody in Ethiopia is allowed to issue such a certificate). So this would be the opposite of our main idea, which is to leave all of the money in Ethiopia at the origin.

Therefore we continue to focus on value addition at the origin. This means better education (because coffee roasters and packaging experts must be trained) and more qualified jobs. And therefore better salaries and real progress. To me it seems quite obvious.

But it is logistically difficult. Probably that is why not many others are doing it until now.